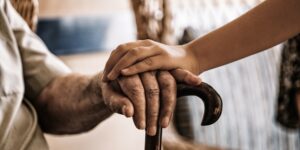 The second in series of three webinars exploring how a family home can be bolstered to reduce the burden of dementia, what moving house might mean, and how a new home can still be supportive. Large numbers of people move into seniors living with an expectation that in “downsizing” and moving into a retirement village they will enter a rich social community, access the care services that they need and be in a supportive environment. This webinar, delivered on 27 October 2021, discussed what you need to know to find a good place to live.

Richard Fleming is a psychologist who has worked with the elderly for more than thirty five years. While occupying the position of Regional Coordinator of Mental Health Services in the S.E. Region of N.S.W. in the 1980’s he played a major role in the deinstitutionalisation of psychiatric services by leading the design and development of the units for the Confused and Disturbed Elderly (CADE units) for the NSW Department of Health.
Following a period working as an independent dementia consultant he established the HammondCare Dementia Services Development Centre in 1995 and in 2010 he was appointed as a Professorial Fellow in the Faculty of Health and Behavioural Sciences in the University of Wollongong. In 2016 he took on the leadership of the newly formed Dementia Training Australia consortium of five universities and Alzheimers Australia which is responsible for the Australia wide delivery of Federally funded dementia training and education. He retired from that position in 2019. He continues to be involved in the supervision of post-graduate students, research and consultancy as an Honorary Professorial Fellow in the Faculty of Science, medicine and Health at the University of Wollongong.
He has published papers on environmental design, reminiscence therapy, reality orientation, depression, assessment of the elderly and service evaluation and is the principal author of books on care planning for people with dementia, environmental design and a comparison between Australian and Japanese dementia care.
Topics