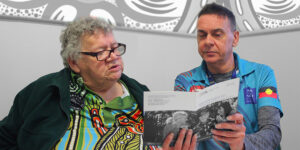 Join Adjunct Professor Mark Wenitong and Adjunct Professor Edward Strivens as they discuss the clinical and cultural best practice principles of detection and diagnosis of cognitive impairment and dementia in Aboriginal and Torres Strait Islander peoples attending primary care. Follow the story of Aunty Molly and her son Frank as she presents with memory and thinking problems and learn about ways to support them.

General Practitioner and Adjunct Professor Queensland University of Technology
Adjunct Professor Mark Wenitong is from the Kabi Kabi tribal group of South Queensland, and has been extensively involved in both clinical and policy work throughout his career as a GP. Mark is the past president and founder of the Australian Indigenous Doctors Association and sits on numerous councils and committees. Mark has also previously been; an Aboriginal Public Health Medical Officer at Apunipima Cape York Health Council working on health reform across the Cape York Aboriginal communities; a Senior Medical Officer at Wuchopperen Health Services in Cairns; a Medical Advisor for the Office for Aboriginal and Torres Strait Islander Health in Canberra; acting CEO of the National Aboriginal Community Controlled Health Organisation; a member of the National Health Committee of the National Health and Medical Research Council, and has worked in community development with World Vision in Papunya, Northern Territory.

Clinical Director for Older Persons James Cook University & Cairns and Hinterland Hospital
Adjunct Professor Eddy Strivens is a practising clinician and national leader in geriatric medicine and dementia, working in Far North Queensland for more than 20 years. He has worked extensively with local Aboriginal and Torres Strait Islander communities and has validated the use of culturally appropriate cognitive assessment tools in these populations. He is practised in linking research with clinical outcomes in these communities. He holds an academic position as Adjunct Professor at James Cook University. His research interests are in culturally appropriate assessment, healthy ageing, integrated care and models of service delivery.
Topics